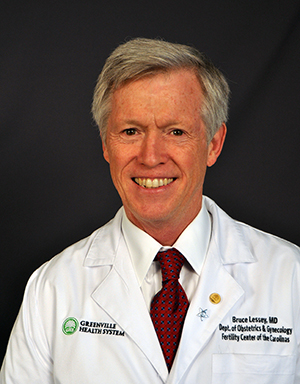 Dr. Lessey is physician-scientist with a long-standing interest in basic and translational research on endometrial function. He received his PhD with Dr. Thomas Gorell at Colorado State University (1976-1980) with a focus on steroid receptor biology, expanding into human research under the direction of Kathryn Horowitz at University of CO School of Medicine (1981-84) on breast cancer and later on the endometrium at Duke University 1984-8 with Dr. Kenneth McCarty Jr. There he published one of the first studies on immunohistochemical localization of sex steroid receptors through the menstrual cycle in 1988 demonstrating the decline in epithelial estrogen and progesterone receptors at the time of implantation in humans. He completed his fellowship in Reproductive Endocrinology and Infertility at the University of Pennsylvania, where they published the first in series of comprehensive studies on integrins in the endometrium and established the beta-3 integrin as a biomarker of endometrial receptivity and an early diagnostic test for endometriosis. After becoming a Professor in the Department of OBGYN at the University of North Carolina Chapel Hill (UNC-Chapel Hill) he continued NIH funded research on endometriosis including important DNA microarray studies in collaboration with Linda Giudice. He relocated to Greenville SC to become Division Director at the Greenville Health System in 2003. His focus remains on dysfunctional endometrium and progesterone resistance in the setting of endometriosis. His colleagues at MSU are maintaining a rich collaboration on this project that he will remain involved in. His contribution will include my extensive scientific experience as well as the considerable biorepository that we have collected that can be used for the execution of the proposed studies. He remains excited to remain a part of this exciting collaborative effort that will likely extend our knowledge of how to diagnose and treat endometriosis, a major cause of morbidity in women.